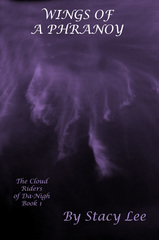 When Samantha wakes in a sterile white room the only thing she can remember is dying. She now finds herself in a world she doesn't know, with people who aren't normal, a young man she is drawn to but doesn't want, no one will explain anything to her and to top it all off they claim her father has been taken and she is needed to help rescue him. The only way to get answers is to find this man they claim is her 'father' before the evil race below kill him. With trepidation Samantha follows Xavier and his friend Axel into a whirlwind adventure of magic, battles and wings, to rescue the father she has never known in a world that isn't hers.
Bound Together
Cloud Riders of Da-Nigh
Book 2

With the bond between Samantha and Xavier completed, their sole task is to strengthen it before the third Blood Moon rises. Working together becomes a problem when Xavier begins to close the links between them shutting Samantha out of his thoughts and emotions. With the words of the ill fated prophecy hanging over their heads they must find the answer to why they can not share their powers as they did the night they joined together against Raider. Returning to The Deep to work with the energies Samantha can control leads to an unexpected tag-a-long, a kid-napping, unsettling visions and facing her nightmares head on putting Sam on a roller-coaster ride she will never forget....

If she lives through it that is.
Cloud Riders of Da-Nigh is a teen series meant for ages 12-18.
It is strongly recommended that the books above be read together. They are a series and in such they go together hand in hand......
King of His Destiny
Dolva
Book 1 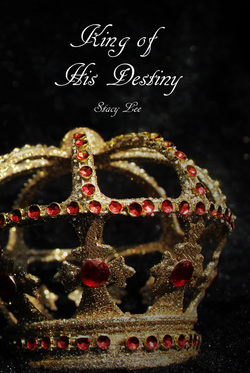 Feeling sluggish and nauseated Elle leaves the restaurant located on the NYU campus to wait in the car for Cynthia, her best friend and roommate, to drive her home. In the ten minutes it takes Cynthia to follow her out a man slams her against a car in the low lit parking lot and attacks her from behind. When she regains consciousness Elle can no more point a finger at her attacker than she can remember what really happened.

Three years later, unable to leave her home for fear of her attacker finding her, shut-in Branelle 'Elle' Brighton must fulfill a promise by traveling to a faraway country to attend her best friend’s wedding. Never having made a promise she hasn't kept she forces herself to leave her home for the first time since the attack. Suffering from debilitating panic attacks and an overwhelming fear that she is being watched, she conquers the airport to arrive in Dolva. Scared and in desperate need of somewhere to hide the last thing she wants to deal with is meeting the royal family Cynthia is marrying into.

Unwilling to let her friend suffer any longer, Cynthia devises a plan to not only get Elle out of the house but to move her, without her knowledge of course, to Dolva permanently. With the help of Elle’s neighbor she manages to get Elle on a plane and in route to Dolva. Now she just had to give Elle a spectacular reason to stay. Hopefully the single King, her fiancé’s brother, will snag her attention long enough to distract her while Cynthia finalizes her plans and Elle’s future.

One look at the petite terrified auburn haired Elle and Sterling is lost. He fought the plans his brothers and Cynthia threw at him but can he resist the woman herself? While relaxing in the dark library with nothing but a cozy fire to light the room, Sterling overhears Elle venting off steam to his portrait about a disastrous day. Well, if the woman is to be believed it had been a bad three years with no end in sight. Sterling now has a choice to make. Make himself known and probably send her running for her life or stay quiet and keep listening until she runs out of steam and leaves.

Instead of choosing, in a moment of weakness on his part, Sterling convinces himself that reenacting her terror and making love to her gently would help her through her difficult times. In staying with the script Sterling is forced to stay behind Elle just as her attacker had done, guaranteeing she would never know who he was. The problem wasn’t the idea he could help her or even that she didn't know him, but the idea only once would ever be enough. Now he had to convince the scared little rabbit that letting him tell her who he is was the right thing to do because no way in hell can he let her continue to think he is just a random employee of the Royal family.

Only one problem with these plans, his destiny was planned for him many years ago. In less than three months he would have no choice but marry the woman he has despised for years. Sterling had only till his birthday to find another woman to be his Queen, a suitable woman, a native woman, a strong woman, a sane woman who wouldn't collapse under pressure. Elle was a foreigner and a woman who couldn’t stand before a crowd without having a panic attack. How could he possibly make her his Queen without destroying her in the process?

Is love enough to enrage an entire country over? Can he prove to himself and to his country that he was more than Dolva’s King? After all is said and done, will he be the King of his destiny?

All Stacy Lee's books are available in E-format at your favorite digital retailer. Including but not limited to, Barnes and Noble, Amazon, IBooks, Kobo and Smashwords!
Powered by