StacyLeeBook.weebly.com
Dare to be Loved
Patronus
Book 1
Marked from birth....
Predestined to be his.... 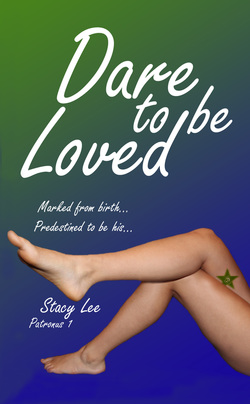 ﻿Naveen Marnie Hannock has had an eventful life. At age four she was in a head-on collision that took her mother’s life. Never knowing who her father was an uncle takes her in and promptly begins to abuse her. The abuse leads to a fear of men that has kept her, by choice, isolated and alone inside her own mind for most of her life. When her uncle died she moved into the nearest town to raise money to finish high school and pay the rent. While working at a coffee shop a friendly customer decides he wants more from her than just java Marnie barely escapes with her life. Alone in Yellowstone National Park, Marnie has wondered for three days, starving and thirsty and very, very lost. When she comes upon a man tied up and being beaten by creatures made from nightmares, she knows her only chance at rescue is to save him.

She never dreamed in doing so he would never let her go…..

Dare Beyers is one of the six ruling brothers of the Patronus race. A supernatural breed made especially for governing every race. His job is to keep the humans safe and ignorant of the breeds surrounding them and to manage the races with fair justice. Being royal also means he will only have one mate in his immortal lifetime. One woman made especially for him. She will be blessed --or cursed-- by fate with a birthmark marking her as his and she can show up at any time during his very long life. Caught by surprise by the very creatures he has been hunting, Dare never expected a rescue. He definitely never dreamed it would come from a woman who is toting a gun and is barefoot in the middle of a deserted forest. But that wasn’t what took him by surprise. No, that would be the fact he knew she belonged to him. Now that he has found her after more than five hundred years of life, he has no idea what to do with her…..

Other than claim her as his one true mate, of course.﻿

Marked for two...
Predestined for only him..... 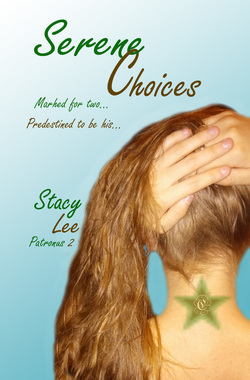 Serene Tranquility Woods is anything but what her name states she is. While out with her friend on their weekly girls night she is approached by a man with metallic yellow eyes and pale skin. He insists she leave with him and when she adamantly refuses he escorts her out anyway. As she struggles to free herself a dark eyed man comes to her rescue. A dark eyed man she instantly despises and yet, she feels she needs to follow him. Feels he is part of her destiny.

When Emmitt is sent on the mission of retrieving the newest mate located he never dreamed he would come across the firecracker in front of him. She was loud, outspoken, determined and she drives him crazy with her continued use of bad language. The woman is a menace and he hopes she belongs to him. But did she?

Cash is the ultimate soldier. Hard, cold and unmoving. The complete opposite and yet, exactly the same as the woman Emmitt drags in over his shoulder kicking and screaming. There is no way this obnoxious woman was meant for him.... was there?

The birthmark marking her a Beyers mate is plainly visible on her neck showing the initials of both Emmitt and Cash. None of them had seen such a thing. Who was her intended mate or did her choice between them matter more than they originally thought? Would she choose with her heart or with her brain? All Serene wants to know is how the heck does she get out of choosing all together?

Once the decision is made the players in this game find they are not the only ones who have been forced into hard choices against their wills. Secrets will be revealed and peoples life will be in danger. Who will manage to come out on top and win the game they didn't volunteer to play?


Will she choose the man for her…
Or will fear send her into the arms of another? 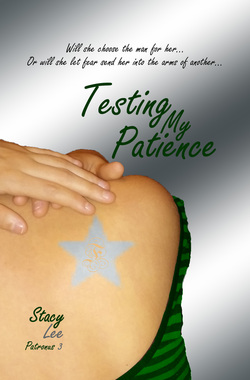 Patience Moody has known since she was old enough to comprehend it that there were things in this world you just didn’t mess with. Then there are times you just have to throw firecrackers at their heads! A healer who prides herself on the fact she saves the humans form the attacks of the supernatural breeds that tear them apart she moves from town to town keeping her secret safe and herself hidden. With an angry shifter chasing her across New York state for the better part of eight years she has learned to keep herself under the radar.

Fin and Bane are sent to retrieve the newest Patronus mate before Monty’s vamps can snatch her. When he sat out on the adventure Fin never expected to find the tiny gun toting street smart healer much less to realize instantly she was his. He also never expected her to shoot him! With anger and flashbacks from spending time as Monty’s prisoner a year ago clouding his head he makes a few decisions that lead the little woman to fear him more than trust him.

Will she let her fear rule her choices? And if she does what will he do to her when he realizes she was no longer his? Fear, anger, memories and love lead us on a new journey into the world of the six ruling Patronus brothers. Will Fin have his mate or will his stubbornness send her running into Bane's arms forever?

She cannot run from fate.....
He will catch her eventually.... 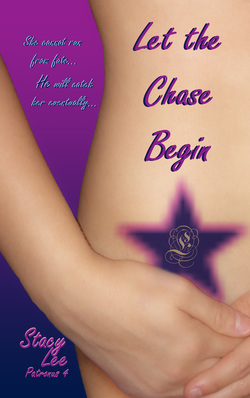 Chasity, known as Chase to her friends, has been hiding a secret for close to one hundred and eight years from not only the world but the man she loves. After meeting Emmitt when she was seventeen she made sure he never saw the birthmark marking her as his mate. Not only would he restrict what she could do he would have complete control over her for the rest of her very long life. As much as she loved the man there was nothing she wanted more than to be free and with him that would never happen.

Now her secret was out.

With a Seer’s words directing her choices, Chase almost believes the lies she feeds herself to keep from turning to Emmitt for the love she desperately craves from him. If she only needed to stay away to keep him safe she would find a way to make herself do it. The problem was the only way to keep him alive was to give in and let him have her, but in doing that she would sign both their death warrants….

Chasity lit a fire in him from the first moment he saw her. She was young and full of energy. She completely fascinated him. Knowing he would never be able to love her with his mate somewhere out there he kept their relationship to friendship though he wanted nothing more than to drag the hot tempered headstrong woman to bed to rid himself of the fascination. However he cared too much for her to use her as a plaything like he does every other woman he sleeps with. When her birthmark is revealed after a fight with the Babble King he can’t believe his eyes. Now he was finally going to have her.

But first he had to catch her!

Authors note: This series is not a stand alone series. You must read all books in order to be able to keep up!!!!
Thanks,
Stacy Lee
The Patronus Series is available in E-format at most digital retailers including but not limited to Barnes and Noble, Amazon, IBooks, Kobo, and Smashwords!
Powered by